My husband and I spent a few days in New York City earlier this month, in between two bouts of record low temperatures up there, and (fortunately) days before snow fell in Manhattan.

As we walked from our hotel to the Metropolitan Museum of Art (the “Met”) one day, I tried to picture Candace Morgan’s apartment. Candace is the main character in my Suspense novel UNDERWATER, and she lives in Atlanta and New York. Undoubtedly, her place in the Upper East Side is tiny compared to the luxury penthouse condominium she owns down south. But it works, because she’s a minimalist – sort of.

In UNDERWATER, Candace spends most of her time in the city I know better, Atlanta (though she jets off to two exotic locations, only one of which I’ve visited).  Relatively few of the story’s scenes take place up north, none during the winter; however, unlike me, Candace knows her way around “the City.”

So, why did my husband and I schedule a trip there, with no thought to the January weather possibilities? Parce que we recently reconnected with an old friend from our college days in Chapel Hill, whom we hadn’t seen in decades. That friend and we decided to rendez-vous in New York (she lives in Boston), and she and we contacted three other UNC friends who live in and around New York and asked them to join us. 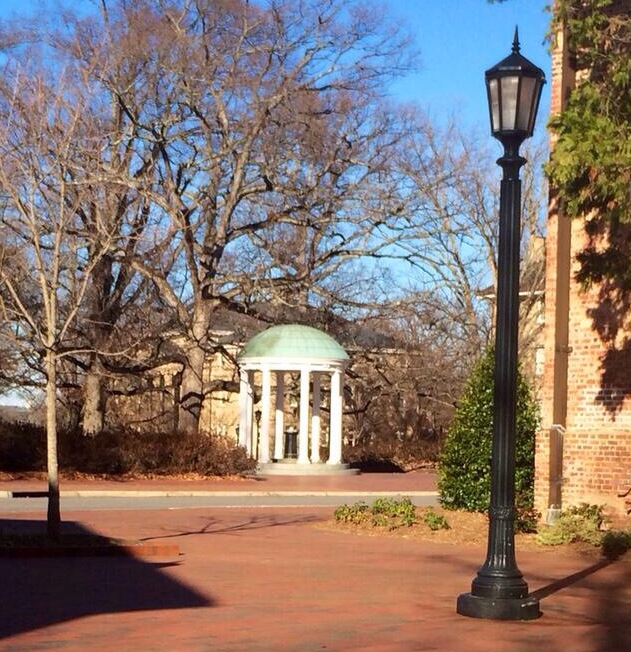 The Old Well on the campus of UNC in Chapel Hill, North Carolina:

We’d seen one of these friends a few times in recent years (although she, the Boston woman, hadn’t seen him since college), but we hadn’t seen or talked to the rest in over thirty years. Pourquoi? Because we had moved to Texas right after graduation and had simply lost contact. We hadn’t known their parents’ addresses or phone numbers  – pretty much the only way, back then, to find each other.

But now, thanks to technology, social networks and just plain serendipity – well, I’m going to credit serendipity too, because it just felt like it was a factor – all but one of us met on a Saturday at a Greek restaurant on 7th Avenue. We caught up over lunch at a round table, then continued to share memories and news at a nearby Irish Pub. That night, it was a smaller group at dinner at an Italian restaurant on 51st Street.

The one who couldn’t attend that Saturday had previously scheduled a weekend trip. But – serendipitously – we had arrived on Thursday, and she happened to be free for dinner that night, so we met at a fabulous midtown restaurant. It was a wonderful kickoff to a great weekend.

It was a  little weird to see each other again after so long and compare memories. On the other hand, it was somehow comfortable. We had all become friends without the benefit of instant and easy communication, and with the aid of serendipity. (Perhaps because we never did anything like it in college, exchanging emails and texts before and after our “reunion” in NYC felt a little odd – but only a little.)

I was glad the weather cooperated while we were there, and I’m thankful we dodged the snow and freezing temperatures (though ours down south have been pareil, lately). Next weekend, as I watch the Super Bowl, if it’s extremely cold (or worse) up there, I’ll be thinking of my northern friends.