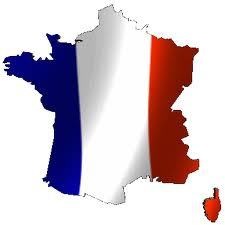 In my novel MAKE THAT DEUX, Jenny’s goal is to become fluent in French. She prepares for her final exams – often the only grade given in a course – by working hard in May, not noticing much about what happens in France that month. When she takes a (final) oral exam, she….

Well, you’ll have to read the book to find out.

During the month of May in France, due to several holidays in quick succession, almost every week-end is a long weekend (on fait le pont). Mais ici, we only have one of those (Memorial Day Weekend), and it happens after all of the French ones.

Le muguet (lily-of-the-valley) is la fleur du bonheur: in France, you give loved ones a little bouquet of it for good luck (porte-bonheur) and to celebrate the arrival of le printemps (spring). I suspect that today through Sunday, on fait le pont (everybody takes a long weekend), or maybe just tomorrow through Sunday. 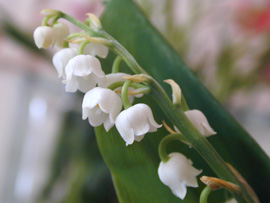 Next week, with the 8th and 9th falling on Wednesday and Thursday, I’m not sure what on fait/one does. Perhaps one takes a very long weekend, working only next Monday and Tuesday, in a kind of work-reversal week (2 days on, 5 days off). Sounds very French, I dare say.

The following weekend, one celebrates Pentecôte by taking a third long weekend.

Three long weekends in a row! Quelle bonne idée! On the other hand, could that be exhausting? Peut-être, Monsieur!

First, there’s only so much relaxing one can do; staying busy (working) may be less tiresome. Second, if one travels during a long weekend, it could cost more than staying at home. Even if one visits family (for free), one’s routine is interrupted. Third – well, my husband and I have a saying taken from a WSJ article dated some time ago: “Work is Home, and Home is Work.”

Yes, that’s right: we often feel “at home” when we’re at work (and since I actually work at home, it gets complicated; happily, I have a home office). But when we are at home, we may feel like we are working. Working on our house, our chores, our projects, our parenting (though we’re almost out of that business), our marriage…and beaucoup de choses!

That doesn’t mean that being at home (and not at work) is hard – but it can be, whether that’s admissable to others or not. Which brings me to fluency: the ability to speak a language smoothly and with apparent ease.

Some people have a gift for languages; others claim to be truly fluent when they aren’t (quite). I speak French, though not as well (yet) as I speak English. Fluency in another language can be hard to achieve, unless you learn as a small child. But if you work at it – practice it until you feel at home, no matter how difficult or confusing it may be – at some point it doesn’t feel like work anymore; on ne travaille pas beaucoup!