The cartes de Noël have been sent (and many received), the tree has been trimmed, the decorations — and lights — carefully placed, and the stockings hung…

but I’m not quite ready for Christmas.

It’s my favorite holiday, with Thanksgiving a close second. I love l’automne (the fall) best of all the seasons, and here in Atlanta, l’hiver (winter) feels like autumn (and sometimes almost like summer). Earlier this month, when my daughter and I visited New York City for a special birthday weekend trip, le temps was very, very cold and windy…

But we still walked down 5th and 6th Avenues, Madison Avenue, Broadway, Canal Street, through Central Park and the World Trade Center Memorial (but not in that order). Other than a few taxi rides, we saw Manhattan à pied (on foot), during the day and at night, with its spectacular illuminations de Noël: 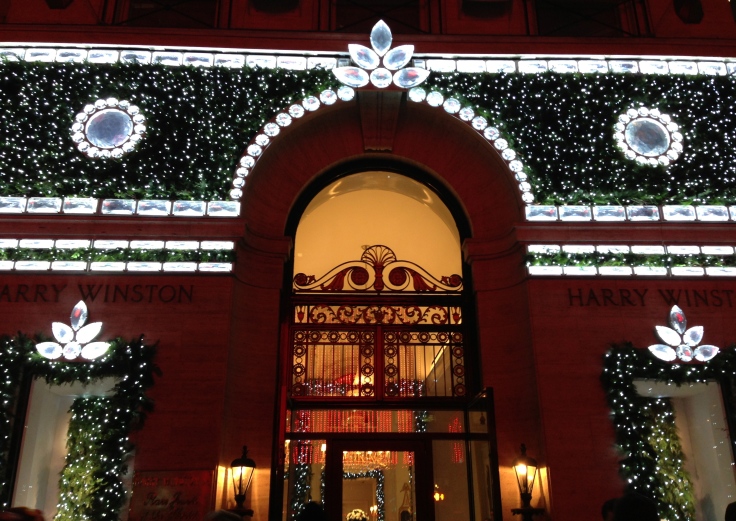 There were plenty of other touristes in New York, and we did a lot there in less than 72 hours — more than I dare to write about in this space. Because what happened in Manhattan…well, you know.

But both of us were ready to come back home that Sunday, where most people are very polite and friendly, and speak a little more slowly. And we were happy to toss our   not-warm-enough-for-the-north coats back in the closet.

But it was worth every freezing moment.

Back home, we’ve done a lot in the last three weeks, though I made a serious effort (again) not to go overboard with decorations. I think I succeeded without being too Grinchy: I left a couple of boxes of holiday “stuff” that had seen better years in the storage room; I (almost always) resisted the urge to buy new “stuff”; and, because I hurt my back somehow (it’s just finally feeling better now, phew), I took things a little slower. And if they didn’t get done, oh well.

Because those things aren’t what Christmas is about, anyway.

When we were first married, my husband and I couldn’t afford to buy Christmas decorations, but we had a few that that my parents had given us because they didn’t want them anymore. One such item was two matching adorable elves holding signs that said “NO” and “EL.”

My husband, always the joker, used to reverse their order on the shelf, so that “EL” was before “NO.” All it was missing was an apostrophe before the “E” and maybe one more “L,” and it would have been, well, a little bit French.*

After five moves, four kids and three decades, we don’t know what happened to “EL” and “NO” — they got lost, sadly. So this year, while shopping one day I spotted a replacement (sort of), and decided we had to have it (plus, it wasn’t expensive): 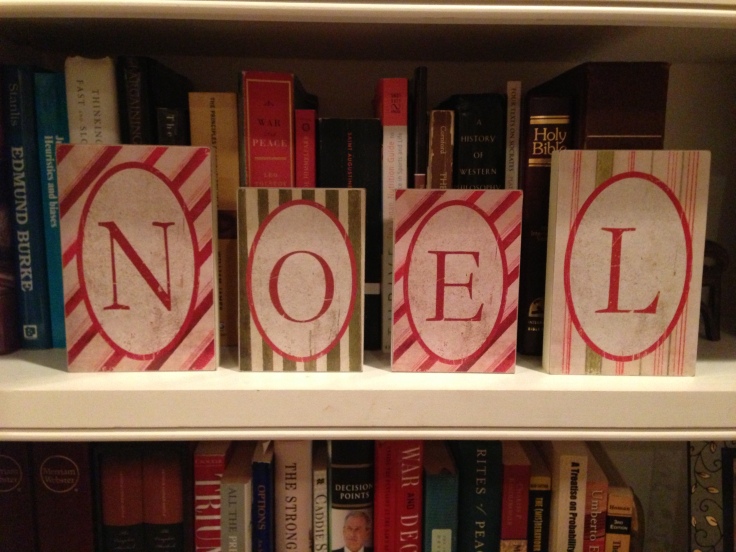 Finally, here’s a photo of one the ornaments hanging on our Christmas tree. It’s very old (also inexpensive), kid-hand-made, and was recently repaired by a dear friend who doesn’t judge me for my phobia of super-glue:

Are you ready for Christmas? I’ve still got a few gifts to buy and a party to host, but other than that, I’m close, and I’ll keep the following lines from Dr. Suess (and from my favorite card received so far this year) in mind, as the 25th approaches:

It came without packages, boxes or bags.

And he puzzled and puzzled ’till his puzzler was sore.

Then the Grinch thought of something he hadn’t before.

What if Christmas, he thought, doesn’t come from a store?

What if Christmas, perhaps, means a little bit more?

*Or Spanish. In my new novel MAKE THAT DEUX, there’s a character called “El.” Read and find out who!