It was the first hotel where my husband and I stayed in France, and it was the nicest.* 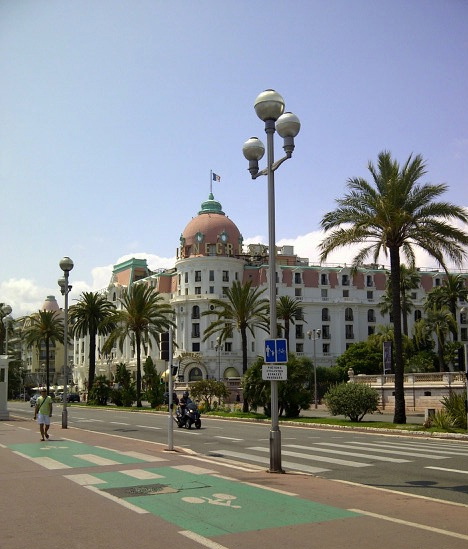 Our plane had arrived that morning from Lisbon. We took a taxi to the Hotel Negresco, a bit of a splurge but well worth it, we agreed. That evening, after strolling along the Promenade des Anglais and through the vieille ville, then visiting not one, but two smallish museums (Matisse and Chagall), we landed at the hotel bar, Le Relais.

I didn’t know the history of the hotel, nor that 2012 was its 100th anniversaire until the other day when I read about it in an entry in The Provence Post titled  What Happens at Negresco…

Oh-la-la. Il faut que vous le lisiez! (You HAVE to read it!)

Unaware that it had been recently redone (but still appreciative of it), we had dinner that first evening at La Rotonde. We sat outside on the terrace, looking out on the Mediterranean Sea, both of us (well, mostly me) trying out our French as we sipped our wine. The following evening — our last one in Nice — we would have loved to dine at the Chantecler, the hotel’s two-star restaurant. But we hadn’t booked a reservation ahead of time. So we found a table at another nice restaurant just steps away.

Le temps (the weather) — though a bit warm during the day — was perfect at night. Walking back to our hotel, I took this photo:

Before we left the next day to head west along the Riveria in our rented voiture (whose GPS ne marchait pas — even the extremely helpful valets at the Negresco couldn’t get it to work), I took this photo of the view from our room, just over La Rotonde (located at the far left side of the hotel in the first photo above):

Staying at the Negresco, even for just two nights, was a very cool experience, and I want to go back someday avec mon mari. I had never seen the hotel when, during my year in France, I stopped for an afternoon in Nice on the way home from Italy. I won’t say what year it was, just that it was long after Richard Burton left Liz’s jewels at the bar by mistake, but way before Michael Jackson installed a dance floor in one of the rooms and rehearsed there…

Somehow, I think my husband and I sensed the history and eccentric personality of the Negresco during our forty-eight hours as guests there in July, and were awed by it. He’s more into history than me (he was reading Alistair Horne’s LA BELLE FRANCE during our vacances), and though he has his idiosyncrasies, I’m more eccentric. You might even say I’m quirky, as a friend did** last month at a launch party for my new novel MAKE THAT DEUX.

*But the two other hotels where we stayed in France were lovely, too: the Hotel St. Christophe in Aix-en-Provence and the Best Western Hotel Le Guilhem in Montpellier.