In my novel MAKE THAT DEUX, Jenny and her friends — like most other college students —  go to a lot of  fêtes (parties), and to at least one French picnic. But they don’t go to any dinner parties.

And they hardly ever discuss politics — or the events going on in the world  — during their year en France.

For the French, “plus ça change, plus c’est la même chose” is a favorite reference to politics. For Americans, it’s often one, and I think it applies to last week’s election very well, no matter what your feeling about the result.

J’aime bien les fêtes et les dîners, and so do the French. My  husband and I have hosted (and attended) quite a few of both during our years together. And, comme tout le monde, normalement we politely avoid the subjects of politics and religion.

But we’re also members of a dinner-party group in which those topics, though not our primary discussion, are not exactly taboo.

Our friends’ table before a recent dinner party

We four couples meet for dinner three or four times a year, and we’ve been doing it for over a decade. In the American fashion, we each bring a course to share and some wine; the host couple provides the entree. We’re all about the same age and have been together for about as long, and — I guess because we know each other so well — we feel comfortable bringing up our differences, and discussing our ideas.

We begin with cocktails around 7:30, and almost always stay at the table long after dessert, til the wee hours of the morning. We talk about typical dinner-party subjects, like movies, books and sports, but almost inevitably, current events come up, and that leads to politics….and to differing opinions. And sometimes, bets are made on the outcome of elections.

But we always end the evening as friends who respect each other, and each other’s different views. Last summer, when my husband and I visited Versailles,* I found myself thinking about 18th century French nobility, and how they handled their differences, when I took this photo in the King’s apartments:

Back to our own group. Besides discussing politics, we catch up on each other’s lives and families, we eat good food and we share a lot of laughter. Over the years, we’ve had so many memorable evenings, that I wish I’d recorded what happened.

Because truth is stranger than fiction.

Our next evening together probably won’t occur until 2013. However, next month, we will invite these friends and many others to our annual Christmas fête.* At the party, politics  rarely comes up in conversation. People typically chat about the holidays, their families and their recent activities, and share funny stories. 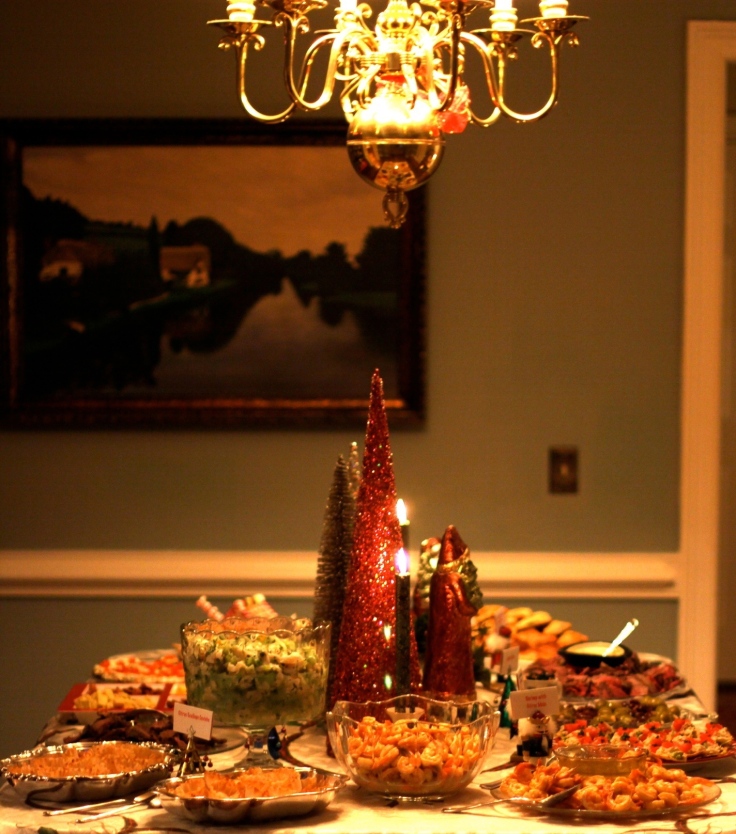 Our table at last year’s gathering

In MAKE THAT DEUX, Jenny is away from home for Noel. I won’t say if she goes to any parties, but she has a memorable Christmas in the Alps.

*more on Versailles — and Noel — in upcoming posts…