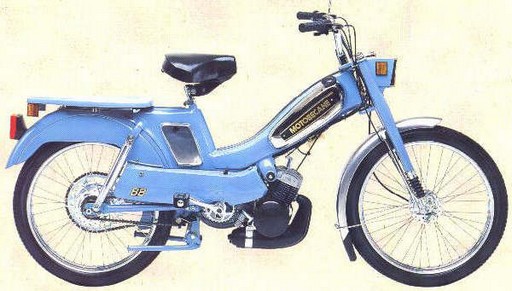 I’ve never cycled in France. But a long time ago, I drove a moped there, and earlier this month, a car. My mobylette was blue, like this one:

I knew my way around Montpellier, the city in the south of France where I studied for a year, and I knew how to get to the closest village, Palavas-les-flots, where I lived in an apartment on the beach. My “bike” didn’t go over about forty miles an hour, but it only took about twenty minutes to get to school. In town, getting around through the narrow, winding streets was easy. When I wanted to call “the States,” I drove to the International Calling Center in the Post Office and waited for a booth. 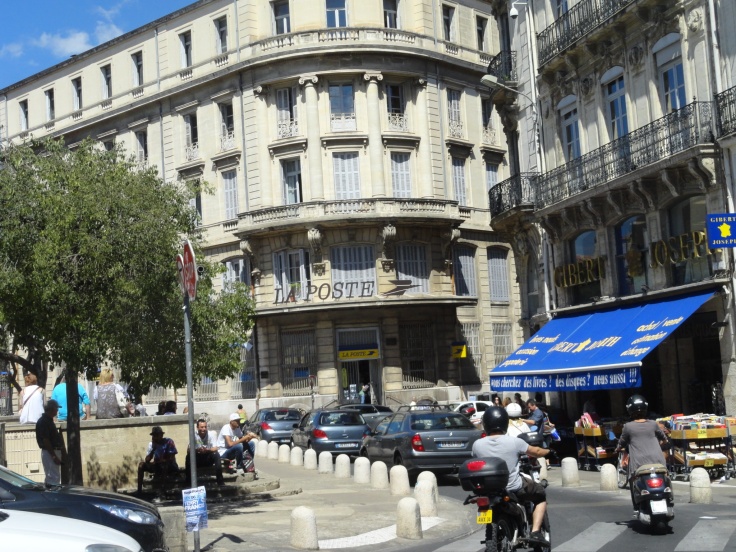 During our trip to France earlier this month, my husband and I arrived in Montpellier one evening en voiture – by car – after visiting Nice and Monaco, Aix-en Provence and Avignon (with a side trip through the Luberon valley). Though our vehicle’s GPS was confusing at best, after three tries, we navigated the narrow streets to our hotel, located in the vieille ville, close to the Promenade du Peyrou and not far from Place de la Comédie:

We pulled up to the entrance and opened our car doors with difficulty — the voiture in the photo is much smaller than the one we rented. We unloaded our valises and were politely instructed to park in an underground parking garage about a quarter mile away. Le Guilhelm was a former 17th century coach inn and conveniently located just steps away from wonderful restaurants and cafés.

The next day, we tooled around the city, visiting the university I had attended and the village where I lived. I thought I’d be able to figure out how to get to both, using our quirky built-in GPS and drawing on memories over three decades old…since I’ve always been good at directions.

We chose la mauvaise route – the wrong way – many times. Without meaning to, we saw more of the city and its environs en voiture than I ever had en mobylette. Guessing at each turn, we made sure not to enter streets with the red and white interdit sign (“do not enter” or more literally, “forbidden”) and finally found a road I recognized (faintly) called Route de Mende. When we found the university, I was struck by how different it was from what I remembered. It was older, of course, and had changed quite a bit.

Following signs out of the city, we made it to Palavas using the road I had traveled many times; it seemed much wider. We had lunch at a café on the beach, close to the apartment I shared with two other American girls. Later that afternoon we returned to Montpellier, parked our car in the garage and set out to explore the centre ville, à pied – on foot. Much that we saw was just as I remembered.

The following morning, it was time to drop off our car. We were taking a train to Lyon, and fortunately the car rental drop lot was located at la gare – the train station – not far from our hotel. I had driven to la gare, or by it, through town on my mobylette many times, but by car, it was necessary to take a roundabout route. We gave ourselves an hour to get there.

Which turned out to be a smart decision. We had decent directions, but, malheureusement, when we approached la gare, we couldn’t find the entrance. We circled around and around the station, always keeping it in view but never able to approach it. Finally, I asked a Frenchwoman for help, and her instructions (given en français) provided our solution.