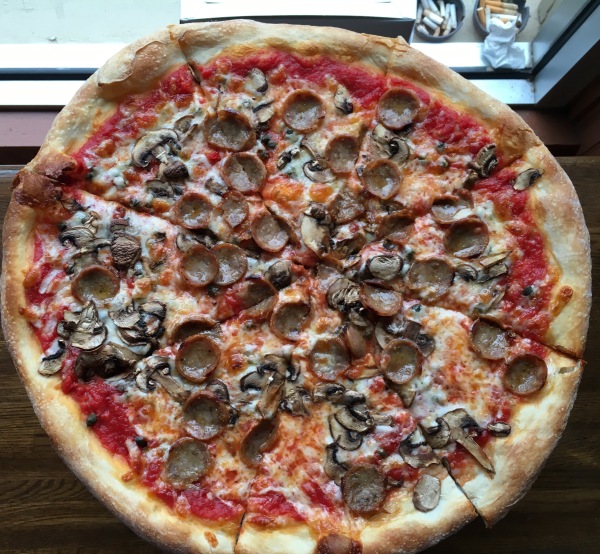 Before choosing this movie, I looked over some of the reviews. Some people liked it, and some didn’t think it was that great. But when I read a little about the story, and saw that someone said it was a funny, enjoyable film and “even my husband liked it,” I knew we had to go.

We both liked this movie, and we laughed out loud a lot. No silliness or crude humor here – just wit, funny situations, and poignant moments. It was an entertaining film, and you really can’t go wrong with Robert De Niro, at any age.

The “intern” – De Niro – is determined to learn (and keep up with) technology and other changes in today’s working world. My husband and I related to more than a few things about his character, “Ben Whittaker.” One was the number of throw pillows on his bed (“I was married for a really long time,” he said). Another was the age that Ben and his wife had met. My husband and I met at the same age.

Which brings me to the pizza we ordered. My husband wanted to choose capers as one of the toppings. “We’ve only had them once, since I’ve been keeping track,” he said.

“Okay,” I said, then selected the other two toppings, to which he quickly agreed. Then I brought up a subject we’ve discussed countless times: the things we never did, had, or experienced when we were growing up.

“Did anybody? I mean, could you order them on a pizza back then?”

“Probably not,” he said. Then, being the chef in the family, he added, “I don’t think I had them until I ordered Chicken Picata at an Italian restaurant. And that was after we were married.”

“That was another thing we never had, growing up,” I said.

Then we chatted about some of the many things we didn’t have (because they didn’t exist), yet never missed. Cell phones. Smartphones. Answering machines. Voicemail. Computers. The Internet. Email. Texting. Google. GPS. Social Media.  Internships.

Like Ben in The Intern, we did have other things that today’s young adults neither miss nor want. Rotary phones. Phone Booths. Phone BOOKS. * Ashtrays. Encyclopedias. Handwritten letters, sent in the mail. Paper maps. Typewriters.

Because, when you meet as young as we did – and stay together as long as we have – you see a lot of changes.

* something Ben has lots of experience with in the film